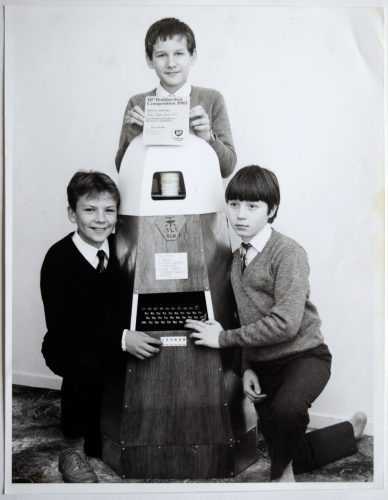 E.C.L.A.I.R .stands for Electronically Controlled, Literate, Artificially Intelligent Robot. (Three of those words are lies.) E.C.L.A.I.R. was a mobile drinks dispenser entered in BP’s Build-a-robot Competition. The competition was for A-level science students, but nobody told us boys from Primary School so we entered anyway.

Building E.C.L.A.I.R. was by far the most impressive thing I’ve done.

But when I left school to study rocket science, its mind-mangling maths left me stuck on the ground. Instead I took refuge in the wonderland of the university library, and looked at maps. Unlike aeronautical engineering, this was a passion that stuck.

After all, I’d only chosen Glasgow University because it was the closest one in Britain to the hills.

By graduation day, I lived for the outdoors. By the age of 23, I’d climbed all the Munros. I worked as a casual labourer and trainee engineer, then worked offshore piloting submersibles. I ran my own music studio, worked as a technical editor, then in IT. But when times were tough, when I was lost in myself, there was always the solace of the hills.

The Weekend Fix is the story of those times.

I’ve also got a series of Scottish history books in production that I am very excited about!